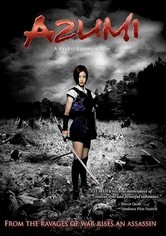 2003 NR 2h 8m DVD
Orphaned as a child in feudal Japan, Azumi is raised by an assassin to kill on command. The shogun orders Azumi and her fellow assassins to eliminate his rivals, but as she carries out her assignment, Azumi questions her task -- and her fate.