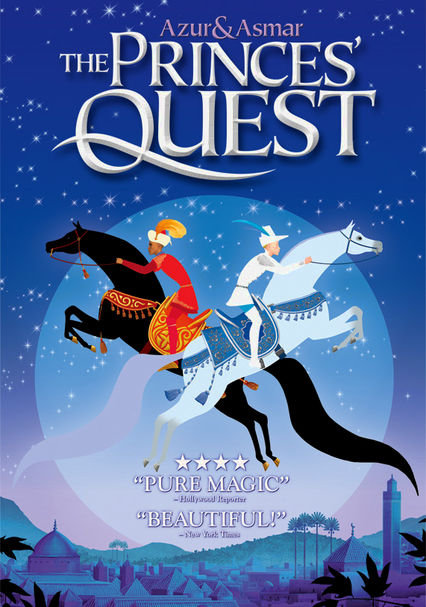 2006 PG 1h 39m DVD
Raised on tales of a Djinn fairy princess, Azur -- a young Frenchman -- goes to North Africa in search of the sprite, only to discover that his close childhood friend, Asmar -- an Arab youth whose mother raised both boys -- also seeks the genie.

Parents need to know that this French production's English-language version tackles issues of race, gender, class, and religion. Despite being set centuries ago, the story deals with more mature themes than many other animated films. The two main characters must overcome dangerous obstacles to save a fairy princess, all the while struggling with discrimination and cultural insensitivity. The majority of characters speak Arabic, and one character loves to point out everything that's "ugly" and "terrible" about the land's language and the people. Violence, while animated, is mostly realistic looking, with characters dueling, falling off cliffs, and facing trials of peril. The language includes mild insults and bigoted/superstitious remarks.

Azur and Asmar each want to fall in love with the Djinn Fairy. Several couples dance and embrace. While it's not sexual, there is a glimpse of Jenane breastfeeding baby Asmar.

Scenes of animated peril include characters being stabbed, falling to their deaths off cliffs, being tied up, fighting with swords, and having to overcome dangerous obstacles.

The movie doesn't shy away from prejudice. At first, Azur and Crapoux talk endlessly about how awful/terrible/ugly the "land across the sea" is and how their country is much better. Azur won't open his blue eyes at first, because people think blue eyes are a curse. Azur's nobleman father is cruel to Jenane and Asmar, firing them and throwing them off his property. But eventually the two main characters, who were raised as brothers despite their different skin color and culture, collaborate and save each other's lives.