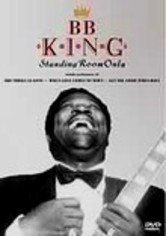 1990 NR 1h 2m DVD
The reigning King of the Blues and his Gibson guitar nicknamed Lucille demonstrate the B.B. King incomparable playing style for a crowd of adoring fans at Atlantic City's Trump Marina Hotel. Once again, the undisputed blues legend confirms his rightful place alongside America's greatest music icons. The live concert include favorites songs such as "Ain't Nobody's Business What I Do," "Why I Sing the Blues" and the immortal "The Thrill Is Gone."