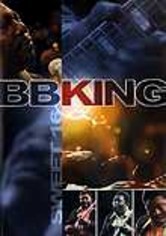 1974 NR 0h 43m DVD
Recorded live in Kinshasa, Zaire, this performance by legendary blues guitarist B.B. King was part of a three-day celebration held in conjunction with the 1974 heavyweight-title fight between Muhammad Ali and George Foreman. The film captures King playing many of his greatest hits, including "Sweet Sixteen," "I Believe in My Soul," "The Thrill Is Gone" and "Why I Sing the Blues," plus several other songs.