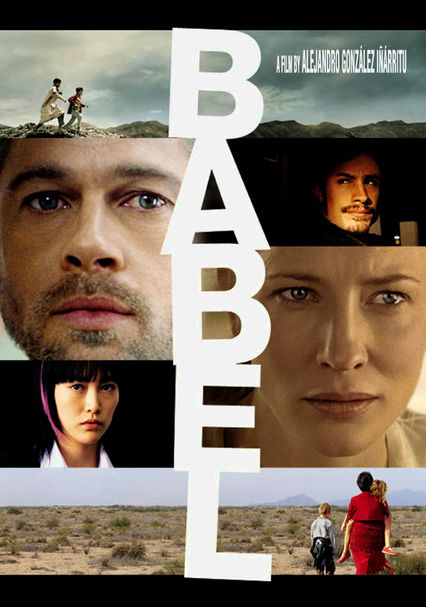 2006 R 2h 23m Blu-ray / DVD
When an American couple vacationing in Morocco falls victim to a random act of violence, a series of events unfolds across four countries that demonstrates both the necessity and impossibility of human communication.

Parents need to know that this film includes explicit, traumatic violence, especially by gunfire and especially involving young children. In one incident, a boy shoots a rifle at a tourists' bus from far away, accidentally hitting a young mother; she bleeds and becomes increasingly weak through the rest of the film. In another, authorities shoot at a father and his two young sons (one shoots back at them, and the other is shot dead, all shown in bloody, sad imagery). When a nanny is lost in the desert with two young children, the kids become badly dehydrated and very sick. To shock some boys, a high school student shows off what's under her school uniform skirt. She also discusses her mother's suicide and considers it for herself; at one point she stands on a high rise balcony, frightening her father. The same girl later appears naked before a policeman (there are two shots of frontal nudity). A boy masturbates. Characters drink, smoke, do drugs, and use profanity, especially "f--k."

A high-school student opens her legs to reveal underwearless crotch (revealing a dark area, very briefly); the same girl shows her naked body to a policeman in effort to "communicate" her sadness and loneliness (she has two shots of full-frontal nudity); girl licks her dentist (he sends her home); a boy watches his sister undress through a peephole, upsetting their father when he finds out; a boy masturbates; young people kiss/dance.

Violence involving children: A Moroccan boy accidentally shoots an American tourist (badly injured, she bleeds and weakens throughout the film and endures stitching without anesthesia); a boy is shot by authorities (bloody body); a boy and authorities exchange gunfire (boy enthusiastic, then horrified); discussion of a mother's suicide and her daughter's consideration of same; authorities threaten a Moroccan man with a gun to the head, then beat him (bloodied face); at a Mexican wedding, revellers shoot guns, scaring Caucasian/U.S.-born children.

Bad decisions throughout: A high-school girl rebels (parties, does drugs, reveals her body); a young boy shoots rifle on a lark; U.S. tourists travel in a country where they're at once privileged and fearful (racist); a nanny travels with her young charges to Mexico, then has trouble crossing the border back into California; her nephew tries to race away from border guards. Some of these characters recover, others don't.