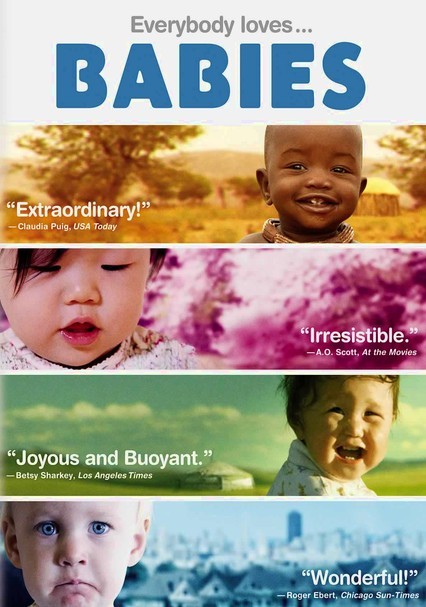 Parents need to know that this documentary -- which features four families from different parts of the world -- holds large appeal for both parents and children alike. There are no subtitles and several different languages spoken, but the universal messages of family and childrearing come through easily. Some families portrayed come from countries where nudity is commonplace (Namibia, specifically), and there are scenes of mothers breastfeeding children, but the images are placed in their social contexts. The movie offers a way for kids to learn about what it's like to grow up elsewhere in the planet, and to acknowledge differences as well as similarities.

Not an issue, though moms are shown breastfeeding and, in Namibia, topless, as is the custom there.

Not really a concern, except the kids can be hard on pets. Also, some scenes might induce wincing among those unfamiliar with certain cultural traditions, as when a Namibian mother shaves her baby's head with a knife. Or when a child seems on the brink of disaster, such as when Bajar teeters atop a barrel.

The film offers much food for thought about different ways of childrearing: Some babies are in more sterile environments, and others aren't. Some babies have more access to books and toys, while others make do with plastic bottles and baby goats. On one hand, it shows that babies thrive and find glee in all sorts of situations, but on the other, it makes us think about unfamilar parenting styles that, if unchecked, could induce judgement calls.

Hardly an issue, though neon signage (HMV, for instance) is everywhere in Tokyo. Also, titles of books are visible.