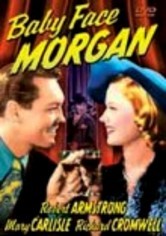 1942 NR 0h 55m DVD
When he takes over his father's business, Edward (Richard Cromwell) has no idea what he's in for. Although he thinks he's running an insurance company, Edward has actually become the head of an organized crime syndicate that makes money exploiting local businesses. Co-starring Robert Armstrong, Mary Carlisle, Warren Hymer and Chick Chandler, this classic black-and-white movie blends together comedy, romance and crime.