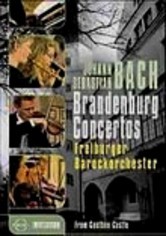 2001 NR 1h 35m DVD
This joyful concert features the Freiburg Baroque Orchestra performing the complete "Brandenburg Concertos" by Johann Sebastian Bach -- sans conductor. Though Bach composed the pieces more than 250 years ago, while serving as the music director for the court of Prince Leopold, these six concertos remain popular with music lovers today -- and portions of them have been used frequently in movie scores and as background music on television shows.