Bach: Mass in B Minor 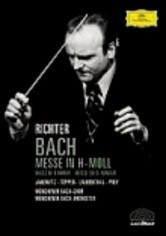 Bach: Mass in B Minor

2006 NR 2h 9m DVD
Conductor Karl Richter leads the Munich Bach Orchestra in this unforgettable 1969 presentation of composer Johann Sebastian Bach's "Mass in B Minor," with moving vocal solos by soprano Gundula Janowitz and bass-baritone Hermann Prey. Completed by Bach during a serious illness shortly before his death in 1750, the four-part Latin mass is considered one of his most beautiful church music works -- but he would never hear it performed.