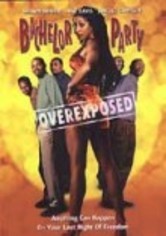 2003 NR 1h 30m DVD
They've been together for years, and now, Ameere (Mike Davis) has finally proposed to his longtime love, Jacquelyn (Shawn Schaffer). But before they say "I do," there's still a no-holds-barred bachelor party to throw for Ameere. As big as this bash is, it's not the only thing that threatens to eclipse the big day: Ameere's got a secret that could derail the couple's whole future. Will Wright co-stars in writer-director Gideon's uproarious comedy.