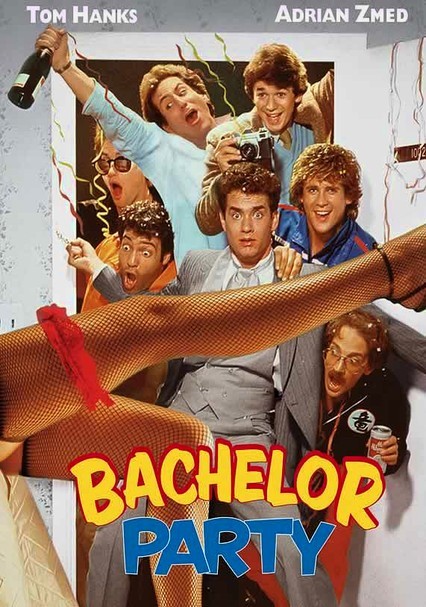 1984 R 1h 45m DVD
Two-time Oscar winner Tom Hanks got his big break in this raunchy comedy. Hanks plays bus driver Rick Gasko, engaged to super-rich Debbie Thompson (Tawny Kitaen). To keep an eye the groom, Debbie and her pals pose as hookers and go to his bachelor party. While the film veers into Animal House territory at times, the laughs are solid.

Parents need to know that this movie is not intended for kids. The comedy's motto "Chicks and guns and drugs and booze and fire trucks -- all the things that make life worth living for!" cues sex/nudity, prostitution (made to looks like fun), and suggestions of lesbian, gay, and human-animal coupling. Drinking is jovial; drug jokes include a donkey (hired for a sex act) fatally overdosing. Swearing is at mild PG-13 level. Hotel property is gleefully trashed. Racial stereotypes include black pimps and horny Japanese men. Wealthy, upscale (AKA non-partying, polite) people are depicted negatively. Running jokes about suicide. Do-not-try-this-at-home stuff with a crossbow. Schoolkids are shown gambling (with the adult driver Rick's approval). Some mockery of nuns, for any conservative Catholics who might still be watching at the 70-minute mark.

Full-frontal female nudity in one scene. Scantily clad "hookers," who do kinky S&M lesbian sex acts just out of camera. Male strippers shown, one with a huge penis (barely off screen) a woman accidentally fondles. Plans for a donkey and an exotic dancer to mate (a drug accident interferes). Male bare buttocks. A porn film eagerly screened (the joke: except for flashes, serious sex/nudity got mysteriously cut). Condoms shown, plentiful suggestive dialogue about oral sex and other techniques. Rick and Debbie live together but aren't married. Rick's friends, including husbands, take turns with prostitutes (off screen). One pairs up with a male transvestite without realizing it.

A fist fight. A threatened assassination by crossbow. A jealous wife beats up her husband. A character tied up and dangled outside a window.

Message, if there is one, seems that true love, even for a wild-and-crazy guy like Rick, can survive incredible temptation (though sour undercurrent is that all Rick's married friends regret leaving bachelorhood behind and try to talk him out of the wedding). Side theme that aristocratic, wealthy folks are uptight and unpleasant; low-class dudes like Rick are more tolerant, fun, and maybe even ethically superior (of course, guess who the target audience for Bachelor Party was?).

Tons of drinking. A depressed character uses pills (specifically Quaaludes). A donkey overdoses on pills and cocaine. Smoking, including a doctor rarely without his pipe.