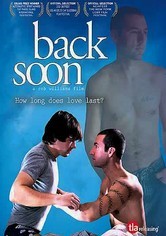 2007 NR 1h 23m DVD
In the wake of his wife's death, Logan (Windham Beacham) becomes fast friends with Gil (Matthew Montgomery). But after a drunken night together ends with the two straight men sharing a steamy bed, the two must reexamine their sexual identities as they forge a new relationship. Writer-director Rob Williams's touching and surprising drama won the Alternative Spirit Award at the 2007 Rhode Island International Film Festival.