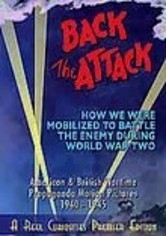 1940 NR 2h 40m DVD
This collection of World War II-era films culled from the vaults of the American and British war offices reveals a few surprises about the ways in which Yanks and Brits were encouraged to support the troops. Highlights include a musical essay that pokes fun at Adolf Hitler and his secret police, the Gestapo; a series of affecting Victory War Bond promotions; and a disquieting celluloid glorification of the atomic bomb.