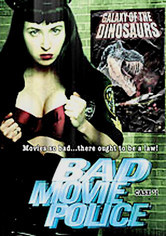 2003 NR 1h 11m DVD
This tongue-in-cheek feature stars Ariauna Albright and Lilith Stabs as buxom cops who bust cinematic felons: the makers of criminally bad movies. Under indictment in the premiere installment of the series is the 1992 gem Galaxy of the Dinosaurs.