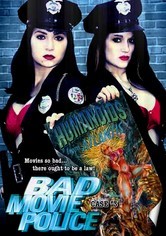 1992 NR 1h 1m DVD
Sgt. Elke Mantooth (Ariauna Albright) and Lt. Drucilla Dread (Lilith Stabs) are shapely as ever and suit up for a third time as the BMP must deal with a bad actor (make that hacktor!) whose claim to fame is a bit part in a 1992 stinker called Humanoids from Atlantis. But you'll really be put to the test as you watch -- interminably -- the actor running around the entire state of Ohio (in mid-winter, no less) in a bad monster suit.