Bad Religion: Live at the Palladium 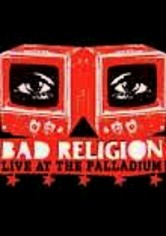 Bad Religion: Live at the Palladium

2006 NR 2h 14m DVD
This retrospective concert, filmed live in 2005 at Hollywood's legendary Palladium, steers through more than two decades of punk rock to present the very best of Bad Religion -- including a rare acoustic piano performance of "Cease." Other tracks include "Modern Man," "Supersonic," "Social Suicide," "Let Them Eat War," "Los Angeles Is Burning," "Atomic Garden," "I Want to Conquer the World" and "American Jesus."