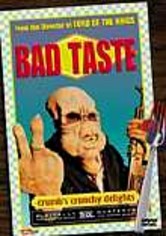 1988 UR 1h 31m DVD
When an army of aliens invades Earth intending to sell humans as intergalactic hamburger meat, the New Zealand government calls in an elite team of psychotic assassins. But are these boys brutal enough to tackle the vilest villains in the universe? From director Peter Jackson (Lord of the Rings), it's the ultimate battle of flying guts, splattering brains, exploding sheep and guzzling vomit, and is a favorite for horror comedy fans.