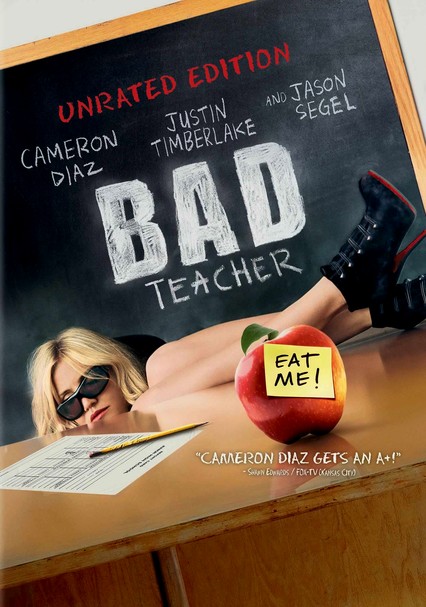 2011 UR 1h 32m Blu-ray / DVD
Cameron Diaz stars as Elizabeth Halsey, a scheming and coarse-tongued middle school teacher who gets dumped by her wealthy boyfriend and rebounds by sinking her claws into a handsome substitute teacher (Justin Timberlake).

Parents need to know that this raunchy comedy about a jaded, selfish, foul-mouthed middle-school teacher will likely attract teen fans expecting an over-the-top Apatowian laugh-fest, but what you get instead is an underwhelming film that's long on unlikeable characters (even though they're played by appealing stars like Cameron Diaz and Justin Timberlake) and short on wit or insight. There's plenty of swearing (including uses of words like "s--t" and "f--k" in front of tweens and teens), sexual references and innuendoes (including some simulated sex and lots of talk about breast implants), as well as dope smoking and drinking.

Plenty of raunch. A man simulates sex while clothed with a woman who's not his girlfriend (later, he's shown with a wet spot on his groin). The same woman seduces another guy with frank talk about sex. Lots of sex talk in general, as well as much discussion about breast implants, with different characters weighing in on what they think of a woman's need for plastic surgery. Some groping and kissing and scanty outfits.

A woman drugs/"roofies" a man so she can steal something and blackmail him later with compromising pictures. A teacher yells and berates her students, sometimes throwing a basketball straight at them (played for laughs). Characters yell at each other.

The positive messages aren't obvious, but if you dig, you can find a couple of take-aways: Love what you do or don't do that job at all. And be happy with yourself so you don't have to look elsewhere for validation.

Some label-dropping: Jaeger LeCoutre, Mercedes Benz, Jim Beam. The main character is a gold-digger, and she pays extra attention to men who appear to have lots of money.

A teacher boozes it up while in the classroom. A student also catches her smoking weed with a pipe; later, she's shown using a bong. Beer drinking and shots.