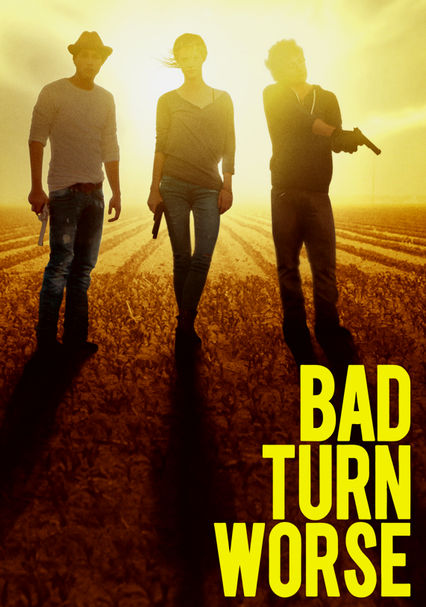 2014 NR 1h 31m DVD
What starts as an unwise way to finance a weekend of pre-college partying ends up as something far worse for the teens in this noir-ish crime drama. After stealing from his boss, Billy Joe learns that the cash he lifted was earmarked for a gangster.

Parents need to know that Bad Turn Worse is a low-budget thriller inspired by crime movies of the 1990s. It has some strong violence, including beatings, shooting, and death, with pools of blood. A teen girl is kidnapped and offered as a sexual object (men try to kiss her, but she fights them off). She does kiss and have sex (no nudity) with a lover while cheating on her boyfriend, and there's strong sexual innuendo in some scenes. Language is strong, with frequent use of "f--k," as well as several uses of "s--t," "goddamn," and more. College-age teens go out for a night of drinking, and one gets very drunk. But the young cast and good word of mouth might make this appealing to teen viewers, especially those who haven't seen its 1990s forerunners.

A teen girl cheats on her boyfriend: She kisses and has sex with another teen boy. No nudity, but strong sexual innuendo.

Characters are shot and fall from heights; pools of blood shown. A girl is kidnapped and tied up. Forced kissing. Burying a dead body. Fighting, arguing.

Lying, cheating, and stealing are the norm. Things work out OK for some of the characters, but it's unclear how much of a price they paid for it.

College-age teens go out for a night of drinking. One gets very drunk and smokes a cigarette. Older characters are shown with flasks.