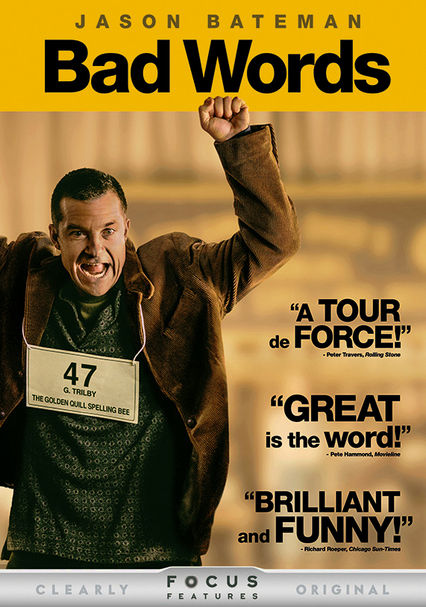 2014 R 1h 29m Blu-ray / DVD
Blessed with a photographic memory but no high school education, Guy Trilby discovers that he's eligible to enter spelling bees intended for children. As Guy steamrolls his pre-teen competition, a journalist tries to find out what motivates him.

Parents need to know that Bad Words is a mostly hilarious, sharp-edged comedy, with lots of crude humor. Though it features children as part of its cast, it's not kid-friendly. In fact, its lead character spares nobody his caustic verbal attacks, including kids. Prepare to hear loads of insulting and coarse language, including "c--ksucker," "s--t" and "f--k." There are also a few scenes showing a couple having sex, though we see only their faces, and a brief view from above the waist. An adult discusses sex with a child as if they're the same age, and even hires a prostitute to show off her breasts to him, which viewers see as well.

A couple is shown having sex in a supply closet -- we see only their faces but it's clear they're having sex from their conversation, movements, and facial expressions. It's played as over-the-top funny, not seductively. A man hires a prostitute to show off her breasts to a 10-year-old boy, which we see, too. The boy later asks if he can touch them. Again this is played for laughs, but it has a very sharp edge. A boy bugs an adult, who, irritated, mentions the word "auto-fellatio" to the child.

A man verbally tears apart the people around him -- children, included -- and seems to be immune to the feelings of others, throwing insults and curses at them whenever they get in his way. In one scene, he derides a woman with graphic descriptions of her genitalia. Parents throw a chair and spit at a car carrying a hated spelling-bee rival.

Even the biggest grump can be softened, if only a little bit, with love, friendship, and understanding. Expect some sexist and racist comments played for humor.

Guy tends to drink a lot, whenever he finds himself near a bar or mini-bar. Sometimes he passes out drunk, and he's also shown driving soon after downing shots, with a child as passenger. Some adults smoke in the movie.