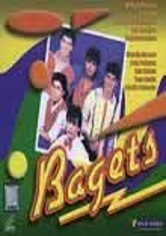 1984 NR 1h 30m DVD
Vowing that they'll somehow conquer the world and solve all of life's mysteries, five teenage boys (William Martinez, Herbert Bautista, J.C. Bonnin, Raymond Lauchengco and Aga Muhlach) look past the differences in their backgrounds and revel in the glory days of youth. Considered to be a 1980s classic in its native Philippines, this bittersweet teen comedy-drama was a box-office hit and made celebrities of several of its young stars.