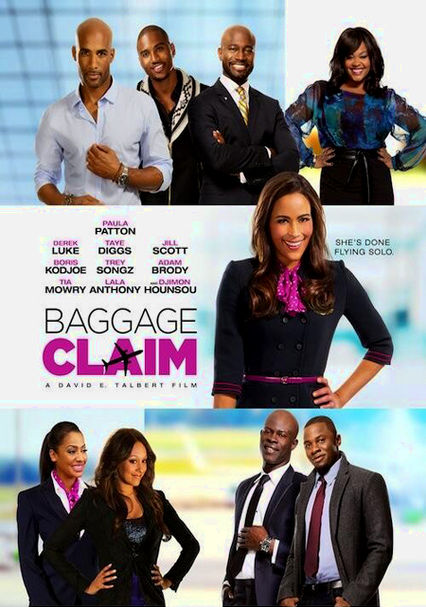 Parents need to know that Baggage Claim is a romantic comedy about a flight attendant who follows her exes on flights to see whether they can rekindle their old spark. Although there's only one actual sex scene (no actual nudity, thought the couple strips down to their underwear and gets into bed), there are plenty of references to doing it (i.e. "boning") and getting it on. Some high-end labels and products are featured, and strong language, while infrequent, includes "bitch," "a--hole," and "s--t." The movie's messages about romance and relationships are very mixed, ranging from the positive adage that it's not "getting married" that's important but "staying married" to the iffier ideas that you have to be married and have kids to be a true woman and that a strong woman needs to let her husband "lead."

One sex scene (the woman strips down to her bra and panties as her lover takes off his shirt and pants on the bed), one scene in which a man is shirtless in a hot tub trying to coax a dressed woman to join him, and a few other kisses. Two people cheat on their partners. Gail refers to sex and her past experiences a lot (for example, she gives Montana a box of cranberry-flavored condoms), and Sam tells her that "everyone knows you like to bone."

One woman threatens to kill her boyfriend when she believes he's in her apartment with another woman. She starts breaking things and screaming that she's going to beat him (and the other woman). Also some moments of physical comedy (like Mo falling out of a trash can or Sam and Gail play-slapping each other).

On the one hand, there's a positive message about marriage being more than just a wedding day. William (whose parents were married for 40 years) tells Montana (whose mother has been married five times) that the "magic isn't in getting married, it's in staying married"). On the other hand, Montana seems desperate to be "anybody's woman," and her entire 30-day plan seems selfish in order not to be one-upped by her engaged baby sister. Her desire to be married in order to be thought of as "a lady" -- and her mom's message that being a woman means being married with kids -- isn't exactly empowering for young women. But Montana does eventually learn that love and marriage should be based on friendship and trust, not an arbitrary timeline.

Montana and other adults drink on the plane and at various dinners and parties. Montana gets drunk at a hotel.