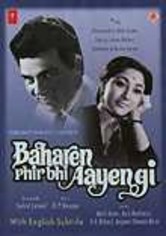 1966 NR 2h 0m DVD
When newspaper reporter Jiten (Dharmendra) writes a scathing exposé about the political corruption rampant in an influential construction firm, his editor, Amita (Mala Sinha), fires him. Once Amita learns that every word Jiten wrote is true, however, she hires him back -- and falls for him in the process. But Jiten's heart belongs to Amita's younger sister (Tanuja) in this melodrama from Shaheed Latif.