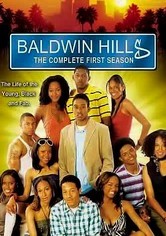 2007 NR 2 discs
Experience life in Baldwin Hills: Packed with athletes and movie stars, the posh L.A. neighborhood is the setting for this docudrama series that follows 11 upper-crust African-American teens as they cope with adolescent life. College visits, spring break, the prom, beach parties, shopping expeditions and the inevitable parental clashes are all part of the adventure for these not-so-typical young people.

Parents need to know that this BET reality show is reminiscent of Laguna Beach and The Hills because it follows a group of mostly privileged teens living in a wealthy suburb of Los Angeles. That means that cast members are shown attending exclusive parties, freely spending their parents' money, and generally embracing a materialistic lifestyle. On the flipside, this show tends to be tamer than its reality cousins, and it makes an effort to examine the realities of class and race. The all-black cast includes teens from a variety of backgrounds, including a boy who "grew up rough" and a girl who lives "in the hood."

Blatant sexuality is scarce, but teens are shown dancing suggestively at clubs and parties.

The show as a whole challenges commonly held stereotypes about African Americans, expanding the definition of what it means to be "black." That said, materialism and privilege are major themes.

Materialism and consumerism are recurring themes, and brand names are mentioned frequently, including BMW and Versace. Lots of sports-themed clothes with player names (Michael Jordan) and other logos as well.