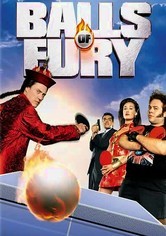 2007 PG-13 1h 31m DVD
Former table-tennis pro Randy Daytona (Dan Fogler) is down on his luck and down on his game when FBI agent Ernie Rodriguez (George Lopez) recruits him for a mission he can't refuse -- to smoke out his father's killer, the evil Feng (Christopher Walken). With the help of a blind sage (James Hong) and an expert trainer (Maggie Q), Daytona travels to Feng's jungle compound, where he'll face a raft of formidable players en route to the prize.

Parents need to know that although this vapid slapstick comedy from the creators of Reno 911! will appeal to tweens and teens, its humor is tinged with a grim undercurrent: The main character is avenging his father's death at the hands of a murderous -- if seemingly ridiculous -- letch. There are also Chinese stereotypes (one character carries a lucky cricket and dispenses with enemies using chopsticks) and a fair bit of violence, mostly cartoonish and without blood. The movie clearly has its tongue firmly in cheek, which takes the edge off the crudest humor, but it's still sex-and-body-part based.

A couple kisses passionately, and she wraps her legs around him; in the scene in which male concubines are presented, one insists on spending the night; sounds of a couple having sex in another room. References to various characters' sexual preferences, though nothing really explicit is said. Plenty of scantily clad women. Men grope Maggie at the ping-pong training center, though she's able to fend them off with martial arts.

Includes gunplay, electrocution, murder by poison dart, and even a bomb going off. But it's largely played for laughs, and viewers don't see blood.

Characters, including Dayton's father, bet on ping-pong; Wong berates Daytona constantly; concubines offer themselves up for sex. Some jokes are based on Asian stereotypes; others are homophobic. But the main character, Randy, is a soft-hearted, genuine guy.

ESPN clips; mentions of the Olympics; references to Def Leppard and the band's hit songs.

Some drinking and smoking in gambling dens and bars.