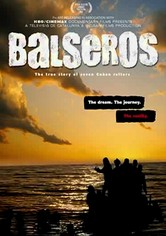 2002 NR 2h 0m DVD
This Oscar-nominated documentary from Carles Bosch and Josep Maria Domenech follows the 1994 exodus of refugees from Cuba to Miami. The perilous journey of the &NFibalseros&NFi_; (Cuban rafters) is captured through remarkable footage, including dramatic shots of the would-be refugees tearing down their houses to construct dangerously flimsy rafts. The filmmakers also catch up, seven years later, with a handful of refugees who were allowed into the U.S.