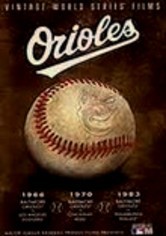 1966 NR 2h 58m DVD
Relive the Baltimore Orioles' three World Series championships in 1966, 1970 and 1983 with this celebratory reel of game clips and rare footage, courtesy of Major League Baseball cameras that captured it all. Highlights include the arrival of Frank Robinson and the team's first Fall Classic; Brooks Robinson's rally-ending play and the Orioles' 10 home runs in five games; and Jim Palmer's tough defense against the rival Philadelphia Phillies.