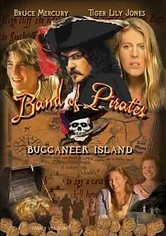 2007 NR 2h 14m DVD
Armed only with a mysteriously coded map, Lydia and William Guthrie set out on an adventurous search to find their missing father, a well-known explorer who's believed to be marooned on a deserted island. Joined by their cousin Molly, the siblings must hurriedly unlock the secrets of the map, not only to locate their father, but to recover a lost treasure -- before a band of pirates beats them to it. Tiger Lily Jones and Bruce Mercury star.