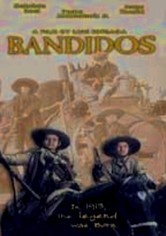 1991 NR 1h 35m DVD
A runaway boy discovers a gang's hideout in the poverty-stricken barrios of Mexico City, but after he witnesses more than he should, the gang goes after the boy. A wild chase leaves his school in ruins, his friends dead, and soon, his increasing number of vengeful collaborators become outlaws themselves, bandidos on the run from the law, not knowing how they will live or who will die.