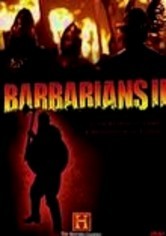 2007 NR 2 discs
This History Channel film explains how the civilized Roman culture was finally brought down by hordes of fearsome barbarians from the untamed wilds of northern Europe, and examines who they were and how they beat the best armies of the ancient world. Animated maps and live-action re-creations show how disorganized groups like the Vandals, Saxons, Franks and Lombards evolved from loose tribal groups to major powers.