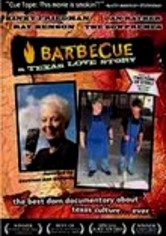 2005 NR 0h 46m DVD
Barbecue is a religion in Texas, and this droll documentary takes a look at some of the colorful characters who live and die for this culinary art. Narrated by former Gov. Ann Richards, the film covers everything from the Church of the Holy BBQ and the Great Texas Mosquito Festival to a zealous group of University of Texas students who lead "barbecue missions." Interviews with Dan Rather, Kinky Friedman and other famous Texans are included.