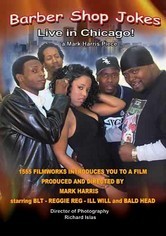 2006 NR 1h 20m DVD
Get ready to laugh out loud with this groundbreaking video from director Mark Harris, featuring four of the most hilarious quipsters ever to come out of the Windy City. Filmed on Chicago's South Side, the video showcases the stand-up comedy stylings of Bald Head, Reggie Reg, Ill Will and BLT (aka Bryan Turner), who find themselves facing one tough crowd: the clientele and staff of a real barbershop.