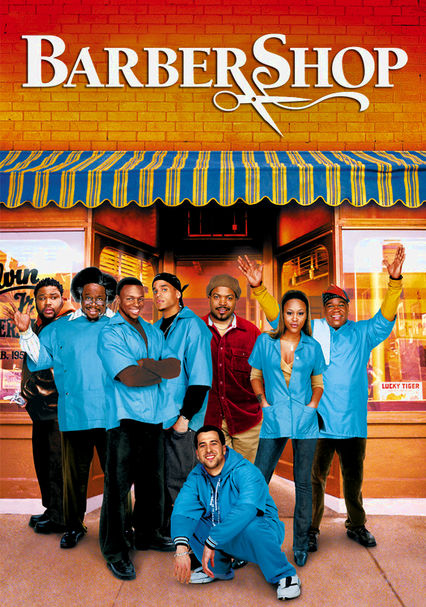 2002 PG-13 1h 42m DVD
Director Tim Story's ensemble comedy depicts a day in the life of a barbershop on Chicago's south side. A $50,000 reward offer for information about a recent heist sends the shop, which is already a hub of speculation and rumor, into a frenzy.

Parents need to know that Barbershop has mature material, including references to adultery and some strong language, including the "N" word and "f--k." Some comments about early civil rights leaders have been very controversial, even prompting calls that they be edited out of the movie. Parents should know that the comments are made by one character and are objected to by the other characters, and they may spark the interest of younger viewers to learn more. There are a few drug references and violent situations, including a character holding but not using a gun. Sexual content includes exaggerated French-kissing and buttocks grabbing and constant talk of women's large and desirable derrieres.

Exaggerated French-kissing and butt-grabbing. Constant talk of women's large and desirable derrieres. A boyfriend lies and is caught with another woman.

A woman takes a bat to a car. Two incompetent robbers steal an ATM by smashing a truck into a store window; the ATM falls on someone's foot, causing pain and bruising. Verbal confrontation, chase, arrest. A cheating boyfriend is socked in the face. A knife is drawn but not used. A gun is drawn but not used.

Contributing to community and social support are more important than making a lot of money. Crime doesn't pay. Fighting back against life's difficulties is noble.