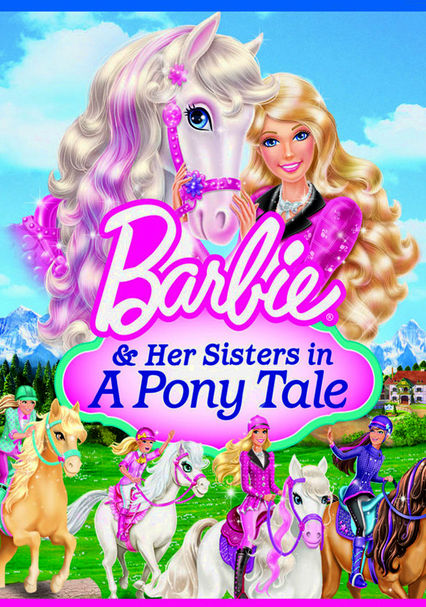 2013 NR 1h 15m DVD
Barbie and her sisters set off on a Swiss adventure to the majestic Alps, where they're excited to spend the summer at a fun-filled riding academy! Barbie can't wait to find a new horse to bring back to Malibu, while Stacie is excited to prove she's an amazing equestrian.

Parents need to know that Barbie and Her Sisters in A Pony Tale is a direct-to-DVD offering starring the popular Mattel doll. Like all Barbie features, this one has a direct merchandise tie-in to a set of equestrian Barbie (and her sister) dolls and their corresponding horses. The movie is fine for younger kids but does contain one potentially scary moment when wolves menacingly creep up on Barbie and her horse until another more powerful horse intervenes and scares the wolves away. The language includes some colorful insults exchanged by bitter rivals such as, "You hair of a child's nostril" and "You pig of a dog of a mule." It's not a major plot point, but there is a little romance between Skipper and a Swiss equestrian. Kids might learn a thing or two about equestrian competitions.

Skipper ends up having a crush, and they end up flirting and dancing at a party.

Wolves are about to attack Barbie when a horse intervenes, saves her, and drives the wolves away. A man is cruel to his horse and overuses the riding whip.

Colorful insults exchanged between the rival brothers: "You hair of a child's nostril" and "You pig of a dog of a mule."

Barbie's relationship with her three sisters promotes healthy sibling relationships through kindness (as opposed to the rival brothers). Healthy competition also is highlighted but more as a way to find one's strength, not necessarily to win. Lastly, being gentle to animals is encouraged.

Barbie movies are made as a tie-in to the dolls. Every time a new Barbie movie comes out on DVD, the accompanying line of related toys is available in stores. Skipper frequently uses an iPad-like tablet.