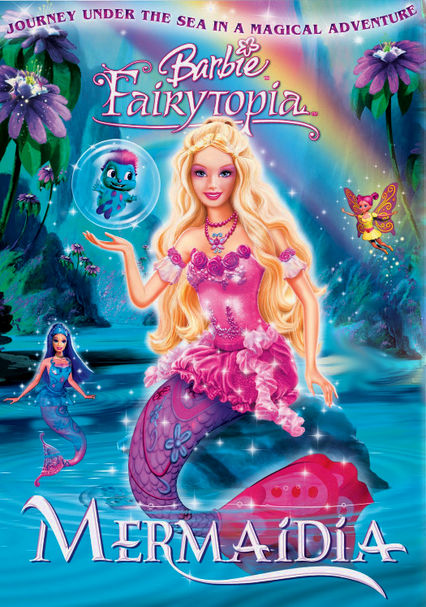 2005 NR 1h 14m DVD
In this animated sequel to Fairytopia, Barbie stars as the enchanted fairy Elina, who learns that the wicked sprite Laverna has captured her friend Nalu, a merman prince. Laverna wants to rule Mermaidia, and the prince holds the knowledge she seeks. Elina joins forces with the reluctant mermaid Nori to save Nalu and keep Mermaidia in the hands of the benevolent Enchantress, but she may have to sacrifice her wings to ensure peace for all.

Parents need to know that this Barbie tale features fairies and mermaids who have to overcome some frightening undersea challenges to save a friend who's been kidnapped. There's never any doubt that everything will end up "happily ever after," but there are a few scenes of mild peril and a villainess with creepy henchmen made of fungus. Nothing offensive to note, except that as with most movies aimed at young girls, there is blossoming romance -- including a character who acts jealously toward a fairy who might be her rival for a mermaid prince's affection. Families concerned with consumerism should note that the movie acts as an 85-minute commercial of sorts for the merchandise of Barbie's Fairytopia collection.

Nori is jealous of Elina and Nalu's past adventure together. Nori is obviously interested in Nalu and tries to find out what kind of relationship Elina and Nalu have, and later Elina plays matchmaker to Nalu and Nori, who profess their love for each other.

An evil Fairy, Laverna, is threatening and power-hungry. Her henchmen, played by fungal creatures, are creepy and scary. Nori and Elina fight off treacherous seaweed that wants to trap them.

"Trust your true self" is Barbie's motto. If you put your personal differences aside, you can work together with someone toward a shared goal. Elina and Nori don't start out as friends, but they agree to try and save Nalu together, and only together do they succeed. Impetuous Nori learns that patience is an important virtue.

The entire film is pretty much a commercial for Barbie -- the doll and all the accessories and branded merchandise.