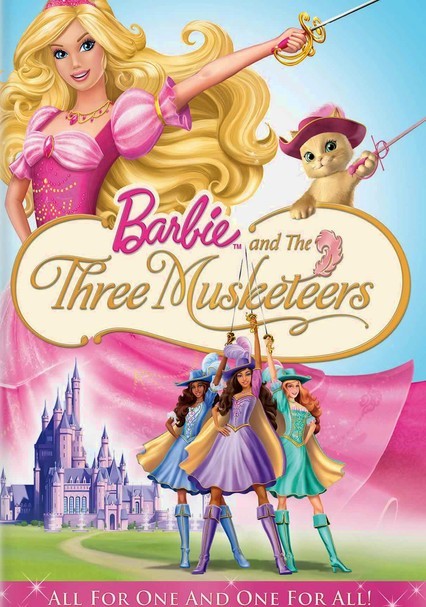 2009 NR 1h 22m DVD
In this fun-filled animated adventure, iconic blonde Barbie (voiced by Kelly Sheridan) stars as Corinne, a common lass from the French countryside who journeys to Paris with plans to stake her claim as a femme musketeer. Before long, pals Teresa, Nikki and Summer join Barbie as sidekick swashbucklers to help the heroine thwart a dastardly plot against the country's handsome prince. This film also features the vocal talent of Tim Curry.

Parents need to know that Barbie is supposed to be a French "countryside girl" whose dream is to be a Musketeer like her father once was. Some parents might question "girl power" being defined by using weapons. Barbie and her friends fight and go after bad guys with their self-made weapons.

A good deal of accidental touching and special moments with the Prince, as Barbie attempts to save his life. Swoony, dreamy sighs as the Prince walks by.

Considering that it's Barbie, there's a lot of sword play and macho language from the girls. "Let's do this!" Barbie shouts as they take on a group of ne'er-do-wells. As they prepare for a costume ball where there's danger, Barbie and her friends decide to make "weapons that blend in with our costumes." Barbie runs with a sword to best the bad guy atop a Parisian church.

Obviously the Barbie tie-ins with the movie are must-haves for fans. A Corinne doll, complete with a sword, is on the shelves.