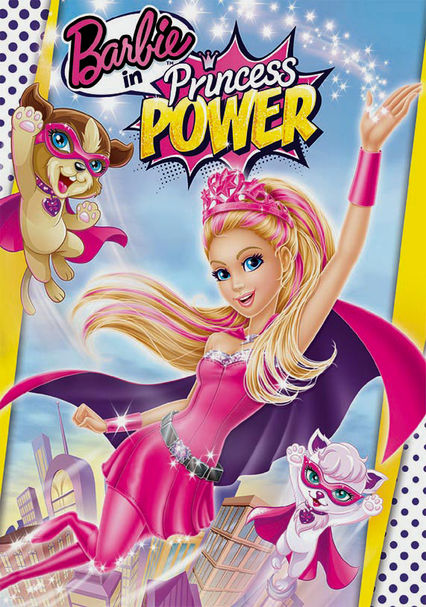 2014 NR 1h 14m DVD
Kara (Barbie) is a modern-day princess with an everyday life. One day, after being kissed by a magical butterfly, Kara soon discovers she has amazing super powers allowing her to transform into Super Sparkle, her secret, crime-fighting alter ego who flies around the kingdom ready to save the day!

Parents need to know that Barbie in Princess Power adds a new action-adventure dimension to the Barbie family of movies and products. Cartoon jeopardy, narrow escapes, and physical battles make up a substantial percentage of the story. Barbie "plays" a princess named Kara who, when kissed by a butterfly with magical powers, turns into Super Sparkle, a superhero with super strength, agility, special weaponry, and the ability to fly. Kara and Corinne, a rival cousin who becomes Dark Sparkle, become invincible heroines capable of rescuing innocents, rounding up criminals, and defeating powerful villains. Along with Kara's best friends, who are scientific masterminds, technological advances are made and weaponry is created, all to combat evil. Still, Kara's interest in fashion and friendship is retained; after all, she is played by Barbie. Products inspired by the movie are available for purchase.

Frequent cartoon action sequences: Characters fly through the air in out-of-control vehicles, crash-land, and destroy property. People are hit over the head by falling rocks and heavy equipment; mountains crumble; molten lava threatens the town; a massive fire rages through a warehouse with a man trapped inside. Barbie saves a variety of people from criminals, catches people who are plummeting to the earth, and engages in an all-out, lengthy battle with two villains firing "sparkle orbs" and trying to destroy the kingdom.

Promotes putting hostility aside to team up and accomplish important tasks; friendship must outweigh competitiveness when stakes are high. Parents cannot overprotect their children and must let go and trust as kids grow up.

Part of the vast Barbie brand of toys, games, movies, and merchandise. This film introduces an array of new superhero Barbie dolls and accessories.