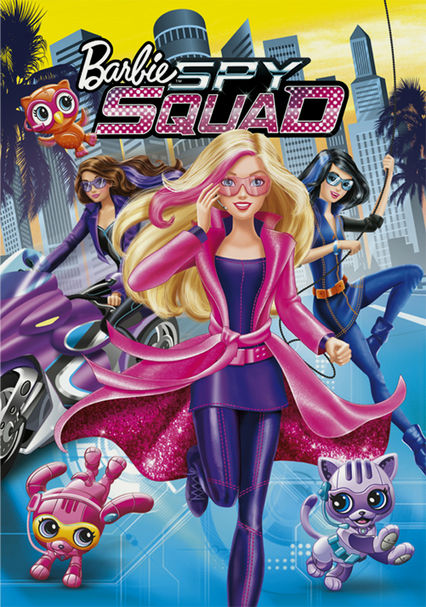 2016 NR 1h 16m DVD
Barbie and her best friends Teresa and Renee transform from hard-working gymnasts to undercover secret agents in this exciting, action-packed adventure! When their amazing gymnastics skills catch the eye of a top-secret spy agency, the girls are soon following clues to a gem-stealing cat burglar who has escaped everyone on the case. With their high-tech gadgets, glam disguises and cute robo-pets, can they prove that smarts and teamwork can get the mission accomplished? It's girl power to the rescue!

Parents need to know that Barbie Spy Squad finds Barbie and her gymnastics teammates recruited as modern-day, high-tech secret agents. The girls are called upon to be brave, skilled, and intelligent in a quest to help the International Intelligence and Innovation Agency (T-3) solve a series of robberies that endanger the world. In fact, all female characters in this tale are strong and intelligent. The filmmakers have conscientiously left the shopping and dress-up behind, except for one short sequence as they prepare to disguise themselves. Among other positive messages (teamwork, loyalty, courage), the concept of visualization -- "See it, then be it!" -- is introduced as a method of prepping for challenging tasks. Cartoon action is mild and includes chases, falls, maneuvering through laser fields, rappelling down steep inclines, and outwitting some robots on the attack, but no one suffers any injuries. As usual, Mattel is offering an extensive new line of Barbie merchandise to tie in with this film.

Cartoon action finds the girls involved in chases and skirmishes with no injuries or real scares. They utilize skilled gymnastics moves and rappelling and defend themselves against a small robot army using gadgetry and smarts. There is an occasional fall and a few mildly suspenseful moments during which a character hangs from a steep height.

Recognizes that sometimes fear and self-doubt get in the way of achievement. Then delivers central message: "See it, then be it!" -- the technique of picturing yourself accomplishing something exactly the way you'd like to accomplish it, then doing it (visualization). Other values promoted: teamwork, loyalty, doing the right thing, and making a difference.