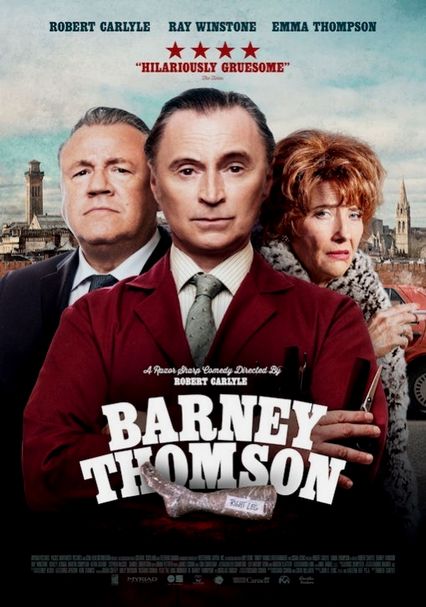 2016 NR 1h 36m DVD
Glaswegian barber Barney Thomson is leading a humdrum existence until the moment he accidentally offs his boss and plunges into the world of a serial killer. When Barney looks to his devious mum to help cover his tracks, she leaps to the challenge.

Parents need to know that Barney Thomson is a dark comedy that tries to blend a serial killer mystery with a tale about a hapless, barely employed barber (Robert Carlyle) who has a domineering mother (Emma Thompson). Expect a few on-screen deaths that aren't especially violent in and of themselves, but there are also a lot of dismembered body parts on display (including a man's genitals). Some characters smoke cigarettes, and just about everyone swears pretty much constantly (mostly "f--k" and "s--t"). On the upside, in the end, the main character stays true to his beliefs and tries to do the right thing.

Two scenes include accidental killings, neither of which is especially violent or gruesome. But a key part of the film centers on a serial killer who dismembers victims, and quite a lot of body parts are shown, sometimes wrapped in plastic and sometimes out in the open -- including a close-up of a severed penis. Fighting.

Barney tries to do the right thing, even though he seems thwarted at every turn. In the end, he stays true to his beliefs and lets the people around him drag themselves down.