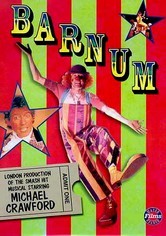 1986 NR 1h 53m DVD
Michael Crawford stars in this flamboyant stage production as P.T. Barnum, co-founder of Barnum & Bailey's "Greatest Show on Earth." Executing trampoline leaps, tumbles and rope spins, Crawford defies gravity with his extraordinary performance. Staged at the Victoria Palace, this rousing musical traces Barnum's life from his days as a down-on-his-luck huckster to his triumph as one of the greatest showmen of all time.