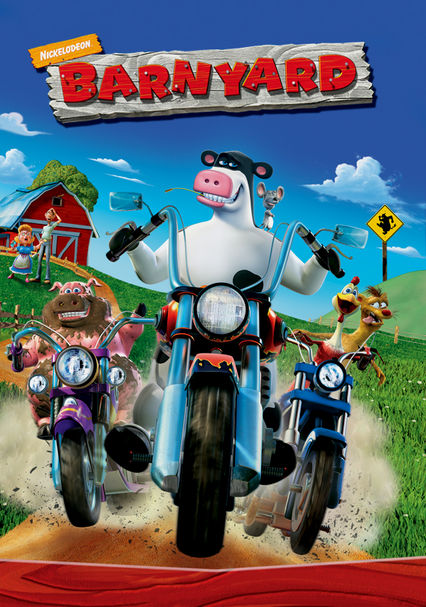 2006 PG 1h 29m DVD
When things get crazy at a farm, it's up to boisterous bovine Otis to save the day in this animated tale. Otis rarely listens to his pop, but when the farmer disappears and the animals go nutty, the young cow realizes he must stop the madness.

Parents need to know that the "kids" in Barnyard: The Original Party Animals (i.e. Otis and his pals) aren't exactly role models. They gamble, steal, drink (milk, but it's portrayed as alcohol), joy-ride, and say words meant as profanities ("Oh, milk me!"). And when some mischievous boys go out "cow-tipping" at night (sneaking into pastures and tipping cows over while they're sleeping), Otis and his buddies take revenge by sneaking into the boy's room, tipping him out of bed, then laughing at him. Crude scenes involve farting, burping, and defecating. Also, the bulls in this movie are drawn with udders, a genetic impossibility unless you're in a Salvador Dali painting. Spoiler alert: There are some tense moments when Otis' father dies at the hands of murderous coyotes after his son ignores the elder cow's wisdom and goes off to party. A burial is held.

Otis has designs on a pregnant cow. Also, the bulls are creepily shaped like linebackers, and they prance around with their udders (say what?) hanging out.

"Oh milk me!" and other words construed as profanities.

Milk is portrayed as alcohol (cows are "drinking" in the car and outside the farmer's window). The farmer is shown drinking.