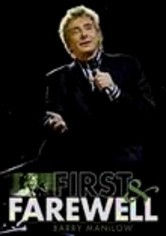 1974 NR 2 discs
Showman Barry Manilow bids adieu to more than three decades of life on the road with this farewell appearance recorded in 2004 at the Pond in Anaheim, Calif. Besides the great concert -- which includes classic hits such as "Mandy," "I Write the Songs" and "Copacabana" -- the festivities feature 1974 film of the crooner's first rehearsal at Carroll's Studio in the Big Apple. During a pair of extensive interviews, Manilow travels down memory lane.