Barry Manilow: Songs from the Seventies 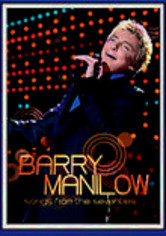 Barry Manilow: Songs from the Seventies

2007 NR 0h 55m DVD
Barry Manilow pays tribute to the decade that propelled him to superstardom in this homecoming concert filmed just blocks from where he grew up. Singing his best-known hits -- as well as songs by other chart-topping artists -- Manilow charms his way through a set list that includes "Mandy," "Copacabana (At the Copa)" and a medley of "Can't Smile Without You," "Even Now," "I Made It Through the Rain," "This One's for You" and "I Write the Songs."