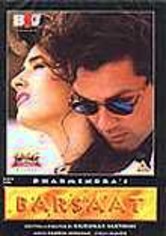 1995 NR 2h 46m DVD
A young girl (Twinkle Khanna) on the verge of receiving a huge inheritance suddenly finds herself the object of two men's attention -- her stepfather (Raj Babbar), who wants to control the wealth, and a young man (Bobby Deol), who claims to love her. When the girl becomes the victim of a series of attacks, she must decide whom to trust. Songs in this film include chartbusting numbers such as "Humko Sirf Tumse Pyar Hai."