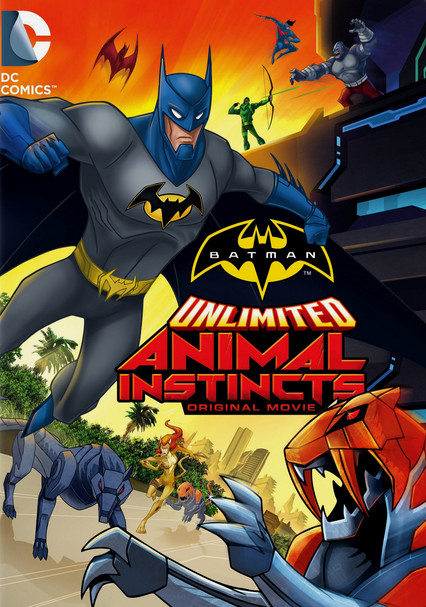 Parents need to know that Batman Unlimited: Animal Instincts is animated superhero business as usual. This movie is true to the "good vs. evil" comic-book tone and intent of Batman stories and has none of the dark elements and complex psychology of the most recent Dark Knight film series. Packaged with a toy, the DVD finds Batman leading his extraordinary, superpowered team (Robin, Night Wing, Green Arrow, and Flash) against a revitalized Penguin, who is in his usual "destroy Gotham" mode. Lasers, explosions, captures, hand-to-hand combat, chases, crashes, with assaults on businesses and the citizens of the metropolis, spread fear and chaos. A few of the bad-guy regulars are present for the action-packed shenanigans -- Killer Croc, Cheetah -- and they're joined by a band of ferocious robotic animals that give Batman and his allies strong adversaries to defeat. There's just enough time between action scenes to catch viewers up on the story and to provide some clever banter and characterizations. Enjoyable for kids comfortable with lots of noisy cartoon jeopardy.

Good triumphs. With intelligence, courage, loyalty, and upright friends, evil will be defeated.

Another in the DC Comics franchise of products, toys, films, TV shows, games, helping sell all things Batman, Penguin, Green Arrow, Flash, and the like.