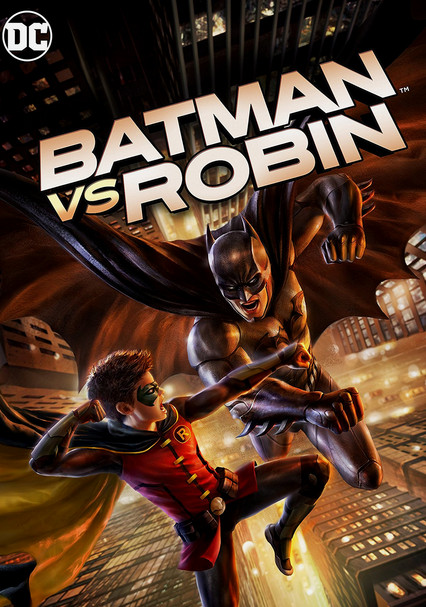 2015 PG-13 1h 20m DVD
When Batman finds himself under attack by his own son, Damian (Robin), he at first suspects the hand of Ra's Al Ghul behind the treachery, but then comes to see that the boy may be controlled by a mysterious and murderous society known as the Court of Owls.

Parents need to know that Batman vs. Robin is a 2015 animated feature in which Bruce Wayne/Batman has a difficult time convincing his 10-year-old son Damian/Robin that "justice, not vengeance" is the only true way to fight crime. Parents and grandparents looking for the 1960s campy "Caped Crusaders" who punctuated their fight scenes with "POW!" and "BAM!" should look elsewhere; this is the darker, more conflicted and complex Batman superhero we have come to expect in more recent decades. There are disturbing scenes of children being held prisoner in small cages in an abandoned factory by a villain called the Dollmaker who sews doll masks on children's faces and has them do his bidding. The Dollmaker also wears a sewn-on doll mask and could easily scare younger or sensitive kids. In flashback scenes, young Bruce Wayne is shown watching his parents get shot and killed by a masked gunman in a dark alley, and the villain called Talon is shown as a young boy being physically and verbally abused by his father. Batman is given a strong hallucinogenic drug; his surroundings psychedelically throb and undulate around him. There are fight and battle scenes throughout -- even Alfred the butler gets in on the action by shooting a rifle -- and occasional profanity ("bastard," "sons of bitches") and some sexual innuendo between Bruce Wayne and his girlfriend and between the former Robin and his girlfriend. Though this is an excellent animated feature of the highest quality, the graphic content and mature themes make this best for teens and older.

Bruce Wayne tells his girlfriend, "I want to show you something," to which she replies, "Your bedroom, I bet." They also are shown together in Bruce's bed after presumably having sex. While on the phone with his girlfriend at Wayne Mansion, the former Robin begins to sound excited as he discusses the lingerie and thong she is wearing.

Frequent fight scenes. In a flashback, a villain is shown as a child being verbally and physically abused by his guardian. In another flashback, young Bruce Wayne watches as his parents are shot and killed by a masked assassin in an alley. A boy kills an owl with a bow and arrow. Gun violence; even Alfred the butler shoots a rifle. Children are held prisoner in an abandoned factory by a very disturbed villain called the Dollmaker who sews doll masks on children's faces and has them do his bidding.

Batman tries teaching his son the importance of "justice, not vengeance" when trying to protect Gotham City from evil.

As Bruce Wayne talks "hands-free" while driving, the words "Bluetooth-enabled" come up on the dashboard screen of his car.

Adults drink wine at dinner but do not act drunk. Two men outside a nightclub pass a bottle of booze back and forth. Batman is given a strong hallucinogenic drug that causes him to see visions of himself killing his parents in a dark alley in Gotham City, as his surroundings psychedelically throb and undulate around him.