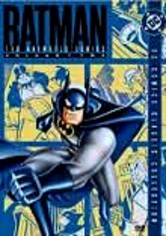 1992 NR 4 discs
Brooding superhero Batman -- joined by eager boy wonder Robin -- fires up the Batmobile to protect Gotham City from ruthless villains such as Catwoman, the Penguin, the Riddler and the Joker in this Emmy-winning animated series. Billionaire playboy Bruce Wayne transforms into the Caped Crusader for more thrilling adventures in Volume 2, which features 28 episodes. Extras include audio commentary and three shorts about the series.