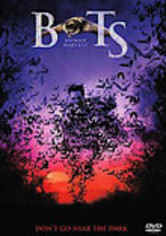 2007 R 1h 27m DVD
In this follow-up to 1999's Bats, a U.S. commando squad is dispatched to capture a rogue military arms scientist to prevent classified information from falling into the hands of Chechnyan rebels with terrorism on their minds. But as the soldiers begin to close in on him, they find themselves under attack by genetically altered bats with a penchant for human flesh. The cast includes Tomas Arana, David Chokachi and Melissa De Sousa.