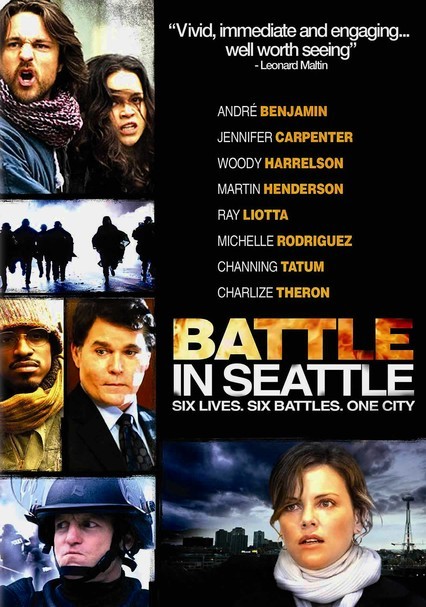 2007 R 1h 38m Blu-ray / DVD
With the World Trade Organization about to convene in his city, Seattle's Mayor Jim Tobin (Ray Liotta) tries to make sure all events go smoothly. As tensions between protestors and authorities rise out of control, activists and bystanders get caught in the crossfire. Based on the 1999 protest referred to as the "Battle of Seattle," this drama features Charlize Theron, Woody Harrelson, André Benjamin, Connie Nielsen and Michelle Rodriguez.

Parents need to know that this drama about the volatile environment in Seattle during the World Trade Organization meeting in 1999 features realistic depictions of political protest, from putting up unauthorized banners to street marching and blockading intersections. The police response to some of these protests is equally realistic, ranging from tear gas and pepper spray to brutal beatings. Teens may not be clamoring to see a movie that features extensive discussion of political and economic issues like free speech and free trade, but if they see it, they may find themselves interested in learning more about the topics it raises. Expect some swearing, smoking, and drinking.

Destruction of private property; police response to protestors includes pepper spray, tear gas, rubber bullets, beatings with truncheons, and more. A pregnant woman is struck in the stomach with a truncheon by a passing policeman; viewers see her agony, blood, and suffering as she loses the baby. Protesters are pepper-sprayed at close range and with great vigor by police. An accidental death is often referenced but takes place off screen.

Some brands -- like Starbucks -- are visible in the background.