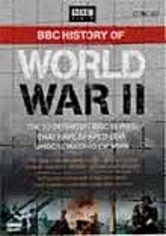 2004 NR 3h 20m DVD
Professor and noted author Richard Holmes examines four of the most influential Allied battle campaigns of World War II in this program based on his book. Archival footage, dramatizations and personal accounts help tell the events of the victory over Rommel at El Alamein; the 1944 battle in the rough conditions of Monte Cassino; the attack on Rhineland bridges at Arnhem; and the British Royal Air Force's offensive against Germany.